We've just launched our shiny new website and you can now place your orders! Please let us know through the contact form if you have any issues. Thank you for your support! Dismiss

Congratulations on your purchase of a Cohesion3D LaserBoard!

Shown are some possible configurations of the K40. There are multiple ways these come wired. We will do our best to address the different ways and if something seems different in your machine than what you see here, please ask!

Take a good picture of your stock electronics in case you need to backtrack later.

I call this the “No Ribbon and White JST Connector Power Supply” Variant:

Loosen up the screws/ nuts holding the white panel in place. Here there are 3 nuts, 2 on the bottom and 1 on the left side. Removing the nuts was enough to free the panel. 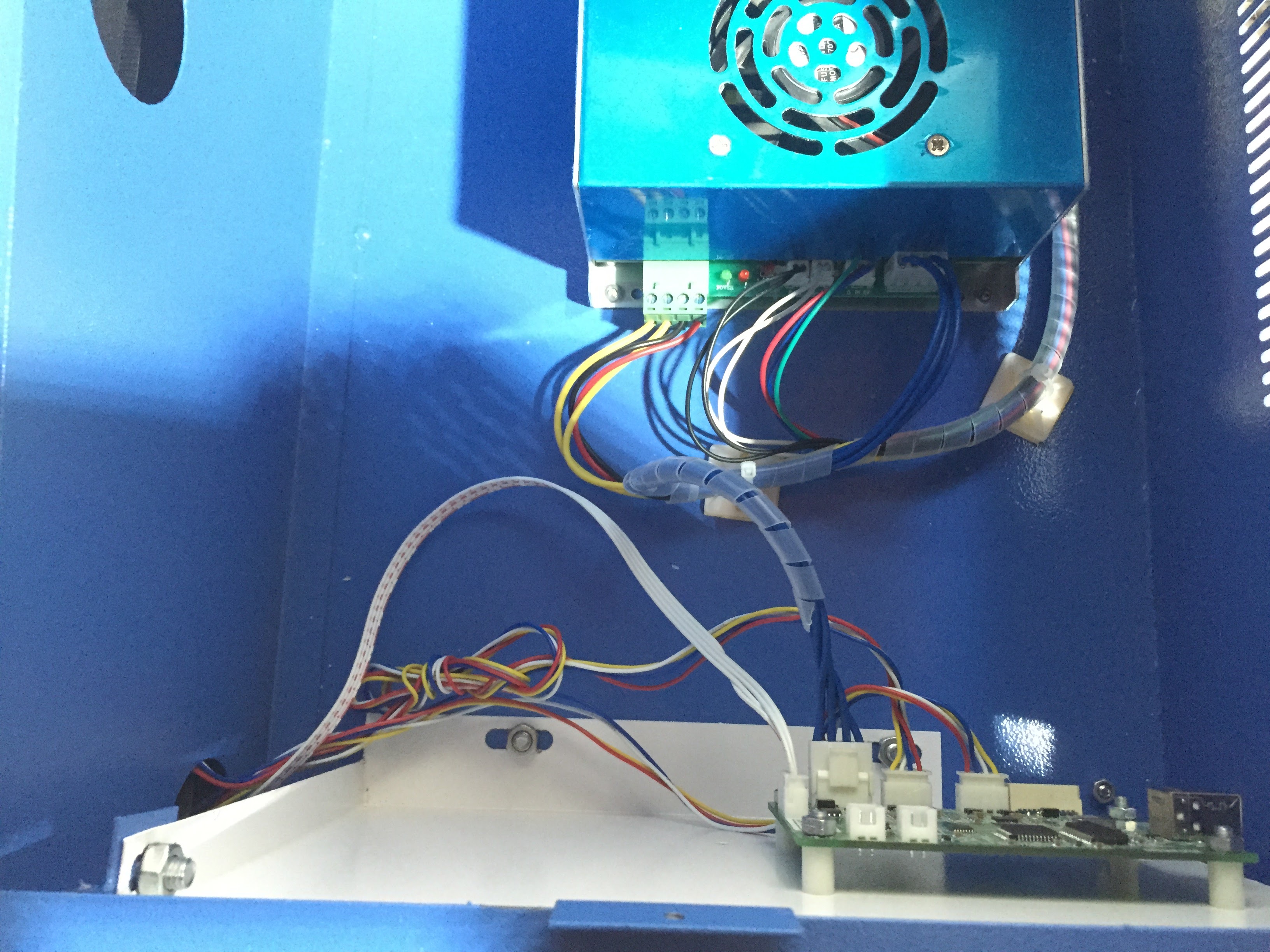 Unplug the wires going to the stock circuit board, remove the white panel. Unscrew and remove the old board. 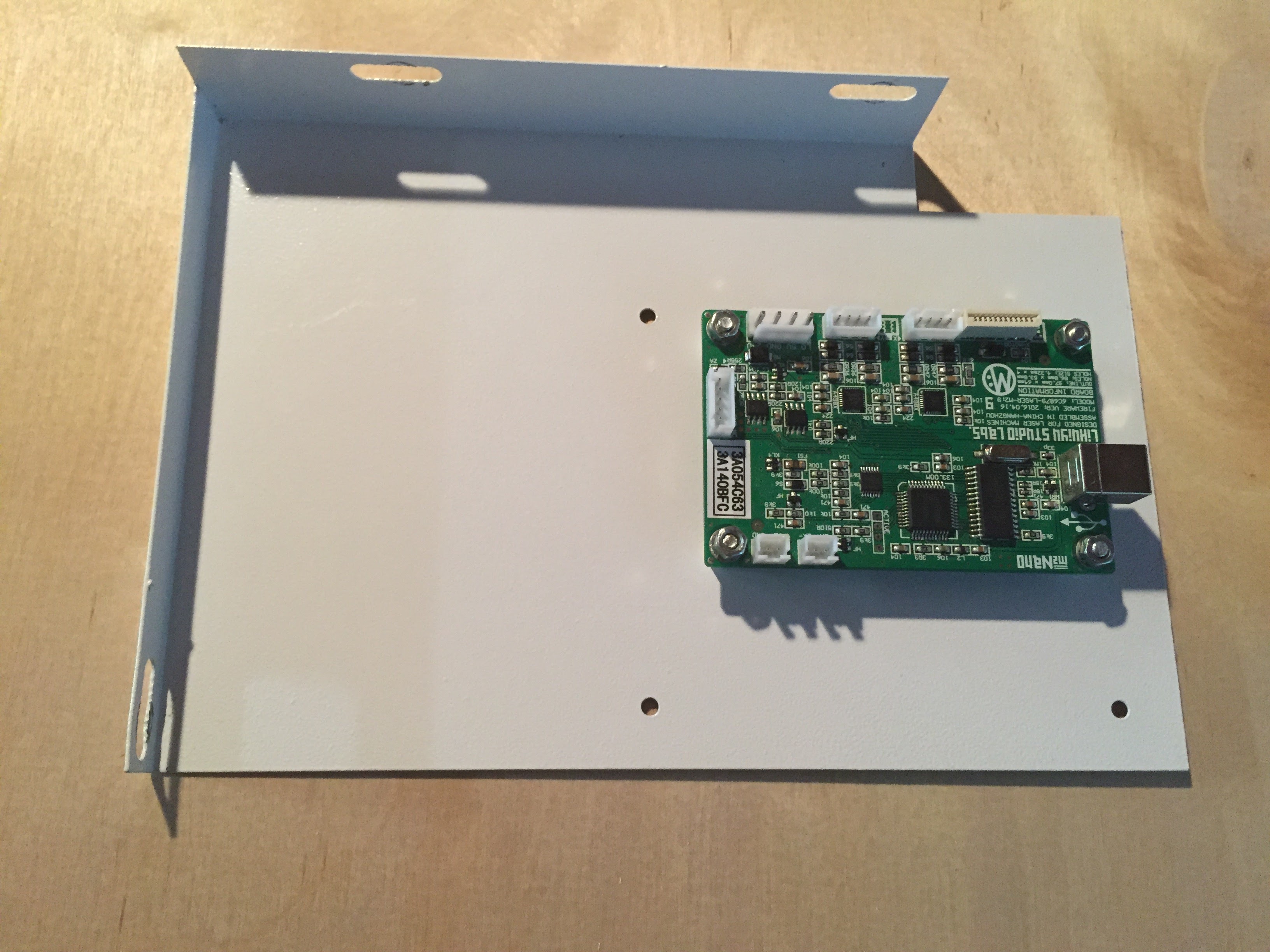 Secure the new board. For the majority of customers, the screw holes line up and the new board is a drop in replacement. For some, their board had a different mounting hole pattern and so some work will be required to make new holes to mount this. M3 Hex Standoffs into to the white panel, M3 screws to secure the board, and a drill-tap combo bit set is a quick way to take care of this. 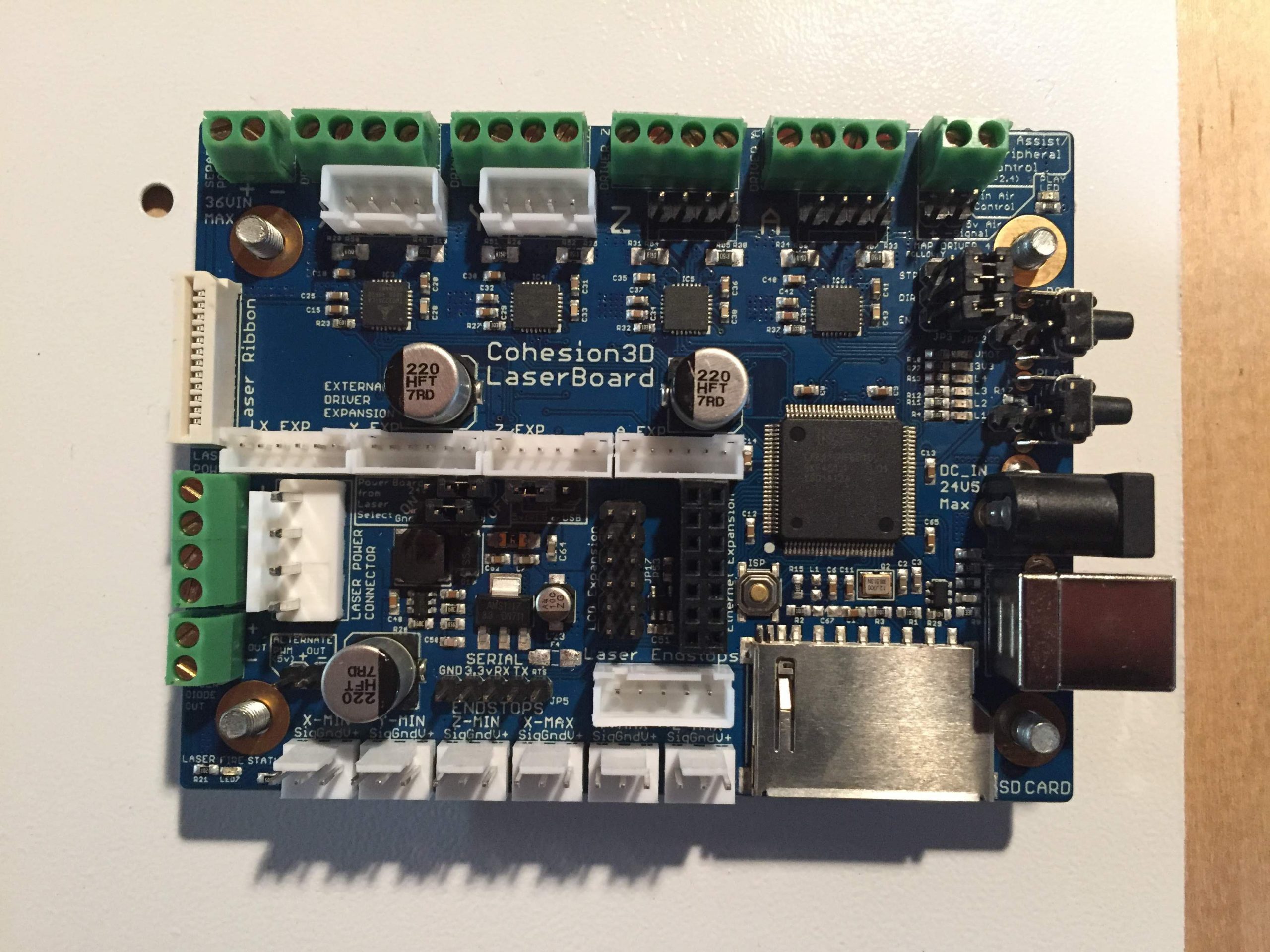 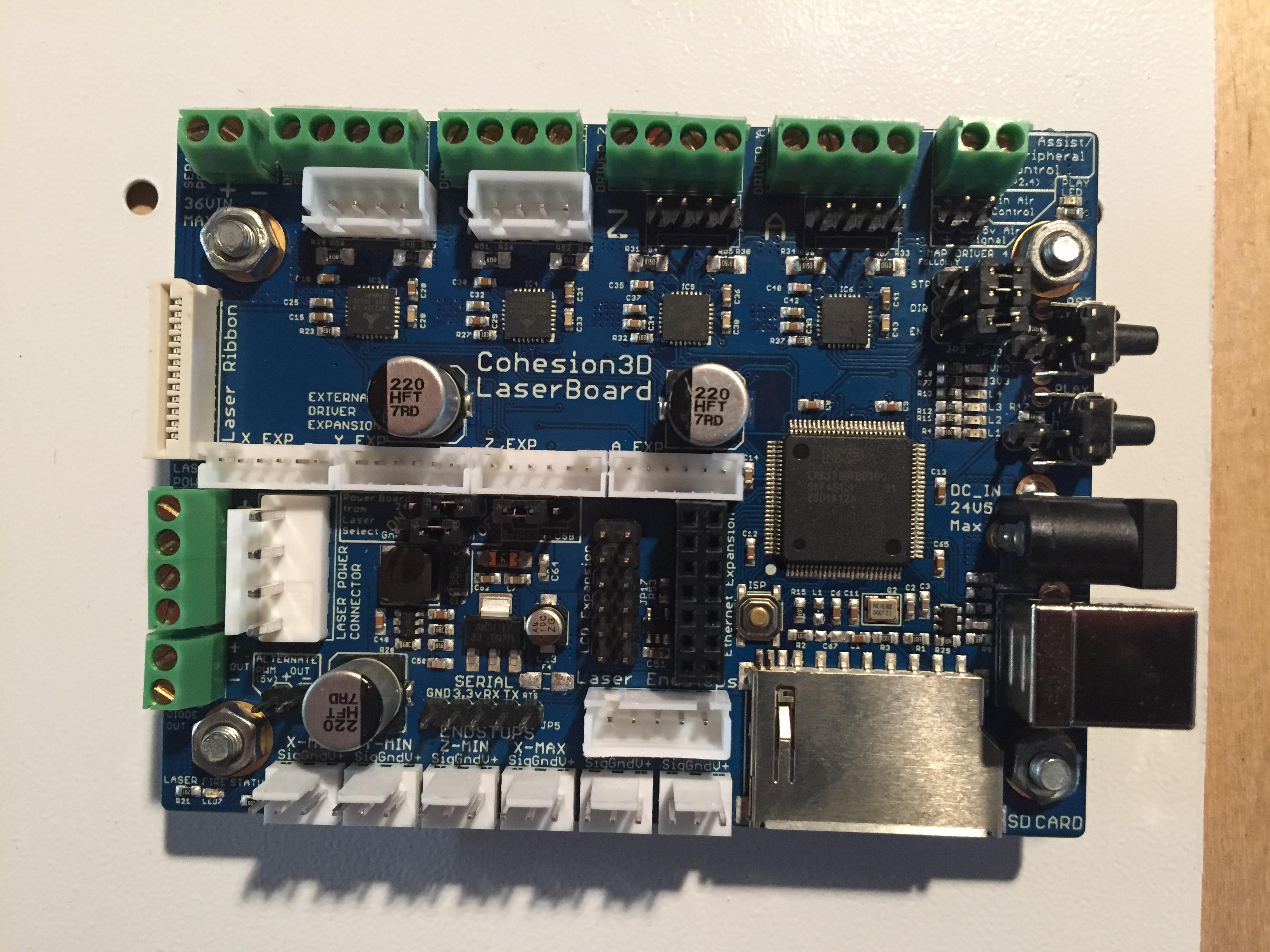 Put the panel back into the laser, it is placed at an angle so that all the connections are accessible. The following pictures are for a specific wiring configuration: there is a power cable (blue wires, large white connector) 2 motor cables (the colorful wires), and the endstop cable (white wires). Alternate wiring configurations will be added here later. 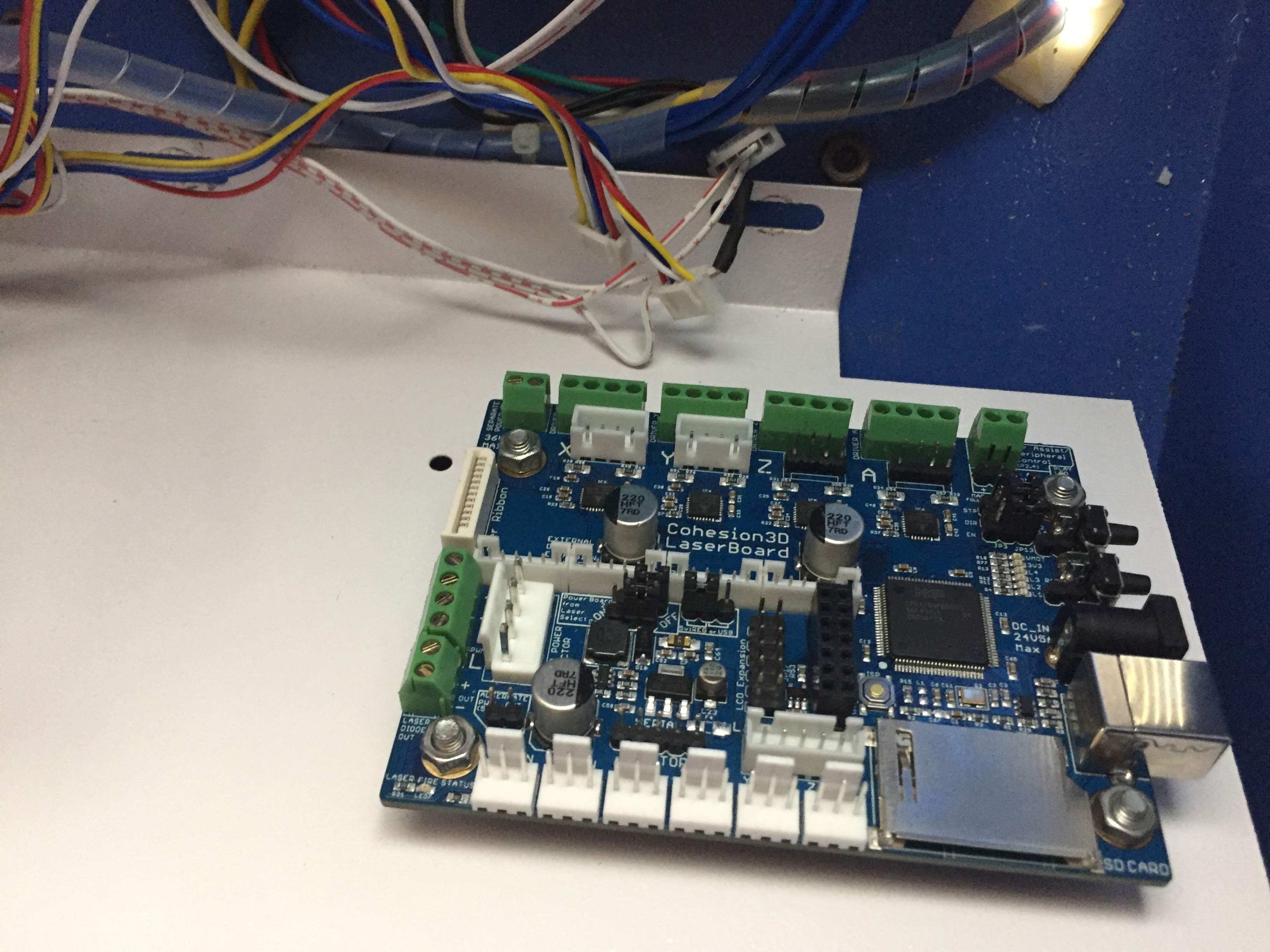 Plug in the X and Y motor connectors. They are polarized meaning they should only go in one way. Do not force them. The wire colors and order get changed constantly. The correct orientation is the important part. 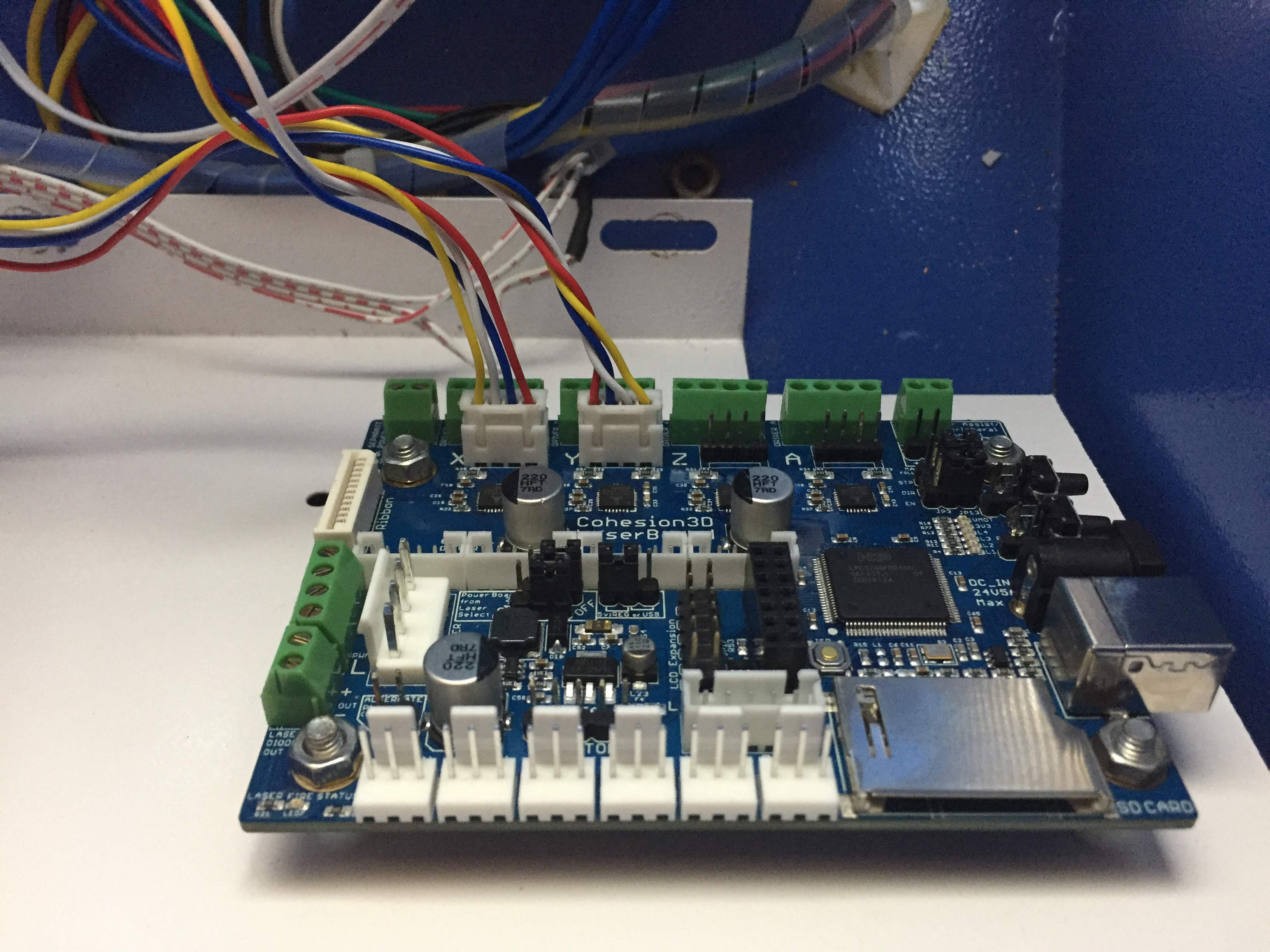 Next, the power cable. Note the latch and how it mates with the wall of the PCB connector. 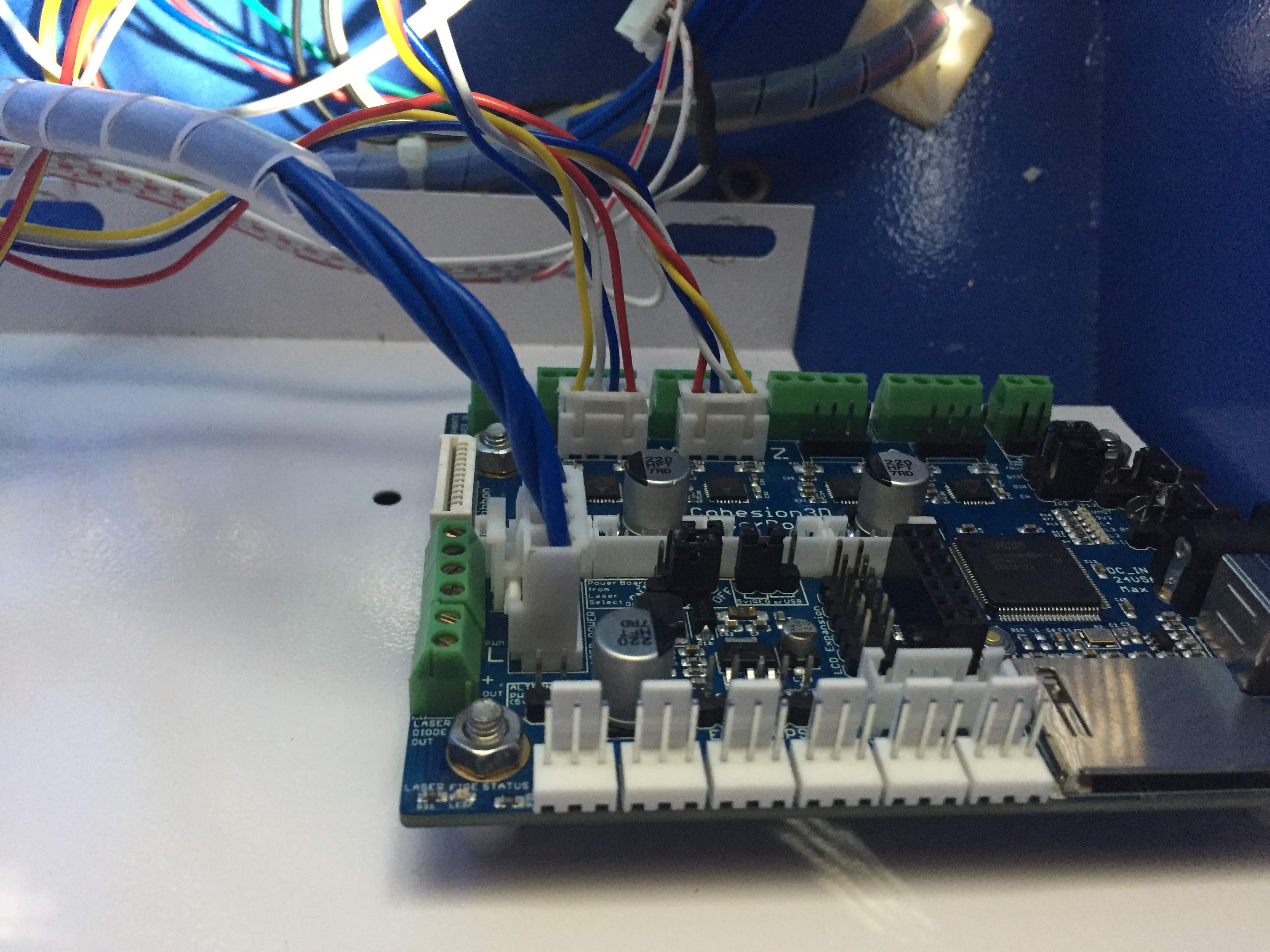 Plug in the endstop cable. This is also a polarized connection and should only go in one way. 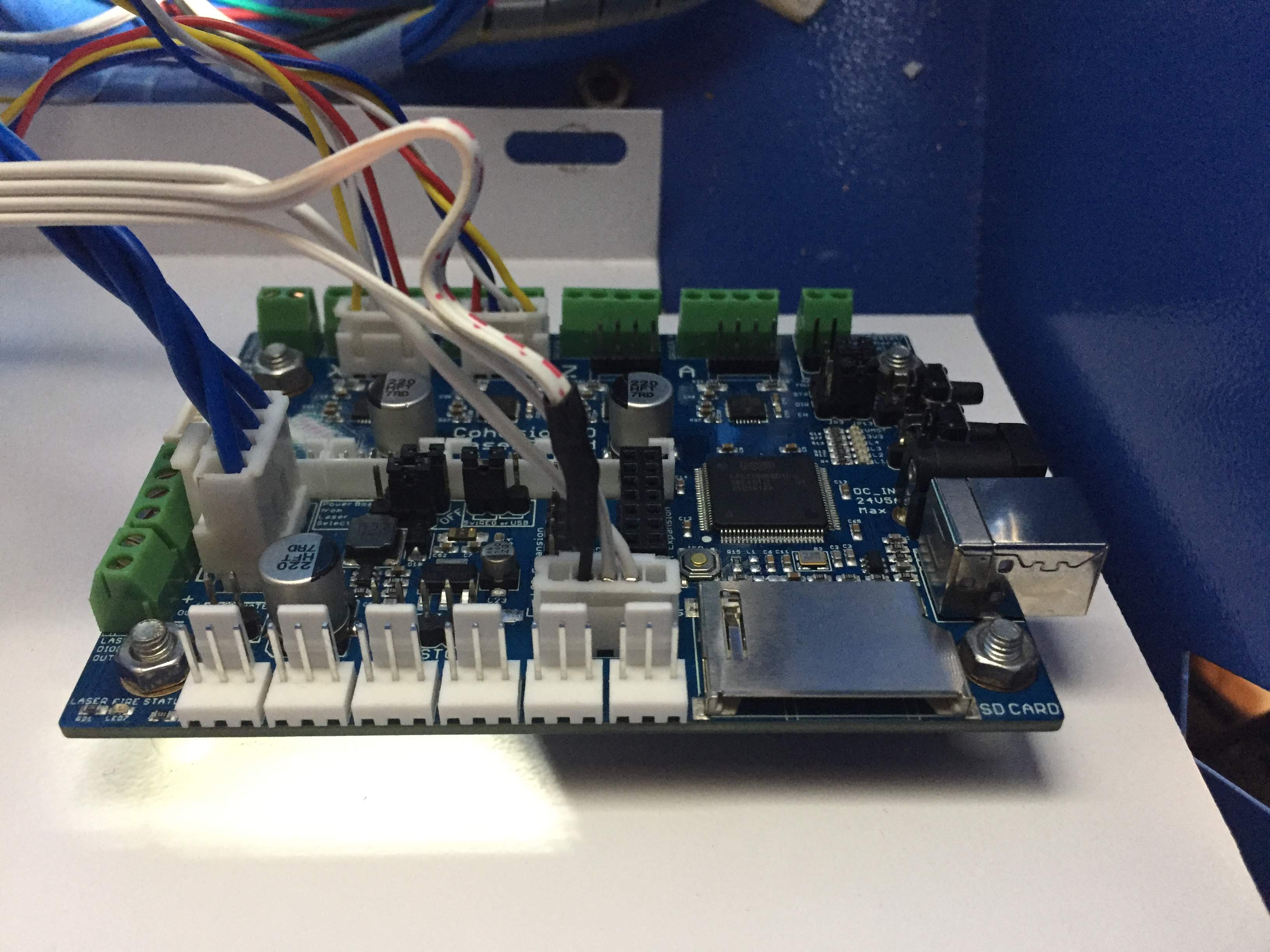 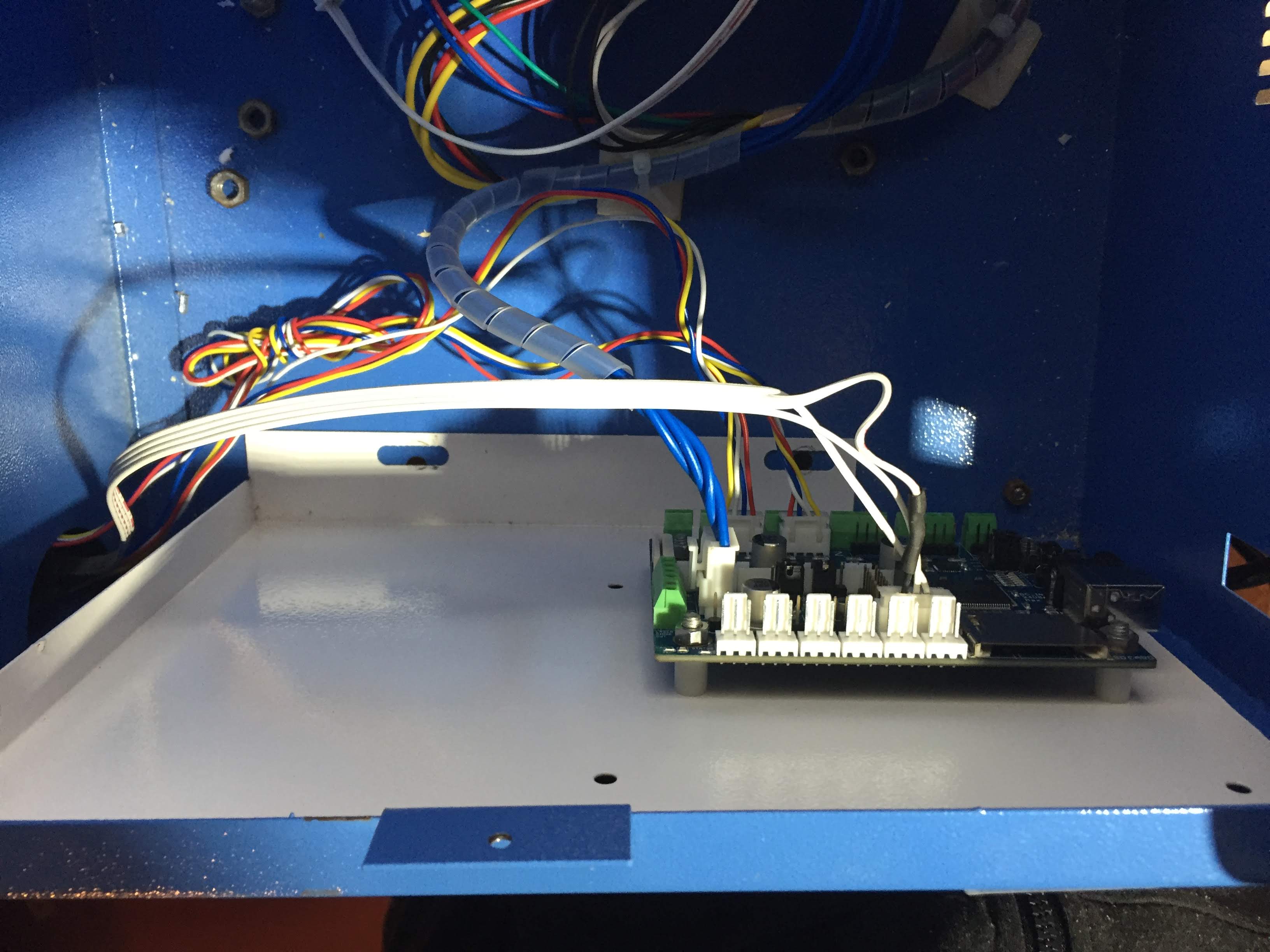 Screw in the panel. 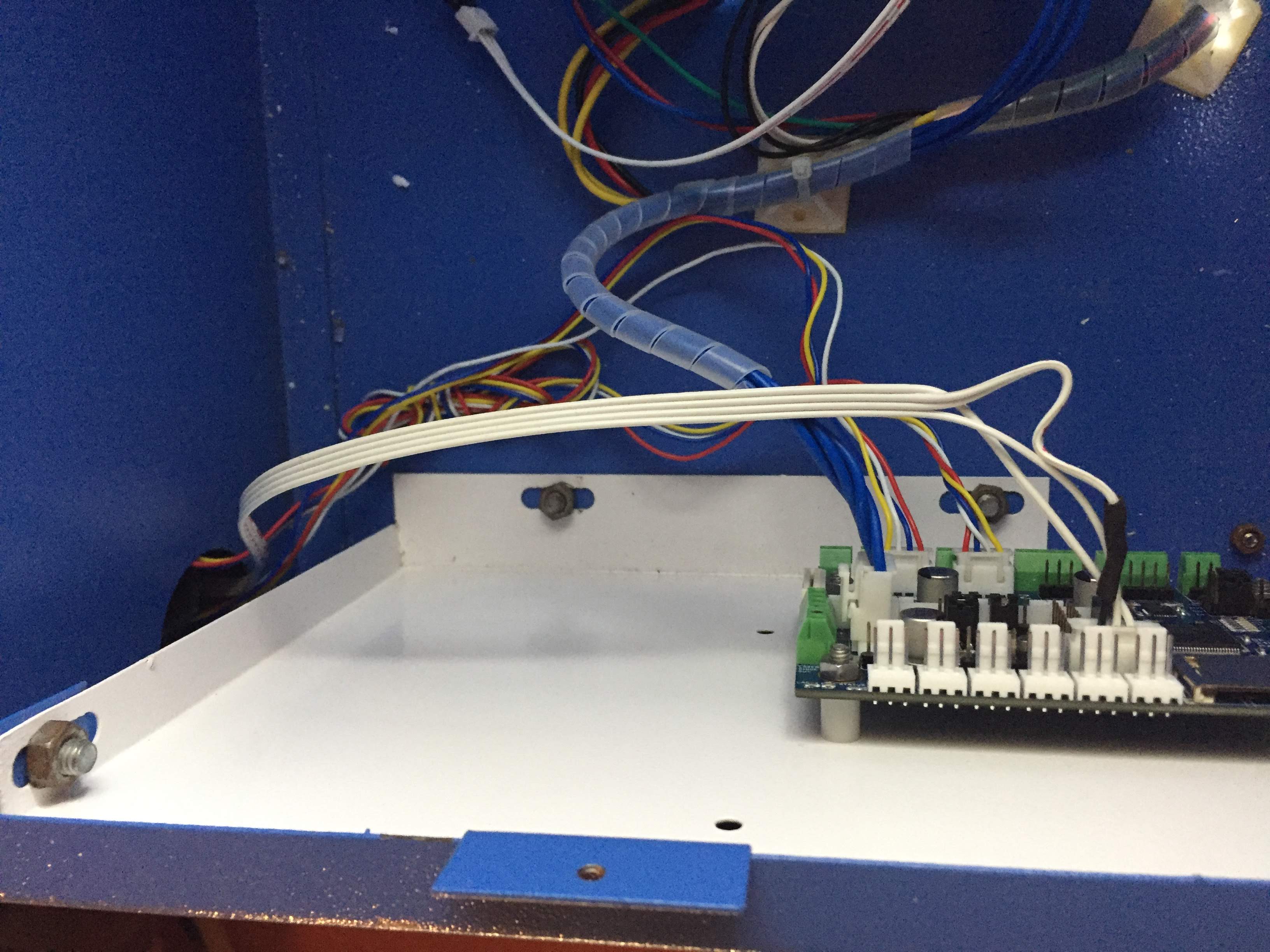 Plug in the DC Barrel side of the Power Adapter to the board. You will also need to plug the AC cable with the “figure 8” into the brick. Do not plug in other side of that cable to wall outlet yet.

Plug the USB Cable into the board. The blue cable that comes with the K40 has been known to cause communication problems, we recommend replacing with a high quality one such as ours. 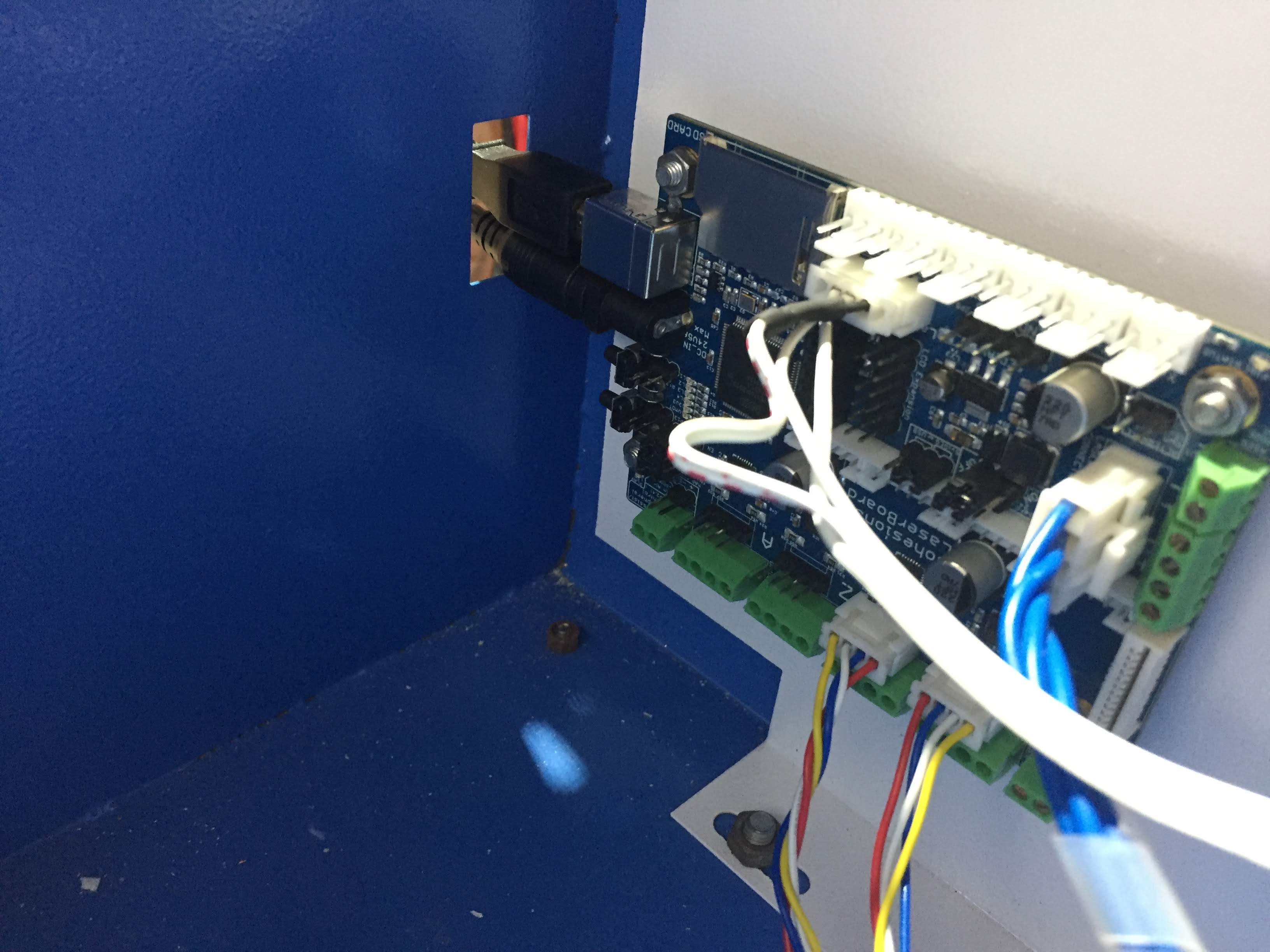 The SD Card that comes with the board already has the firmware and configuration files on it, so just insert that into the board now. 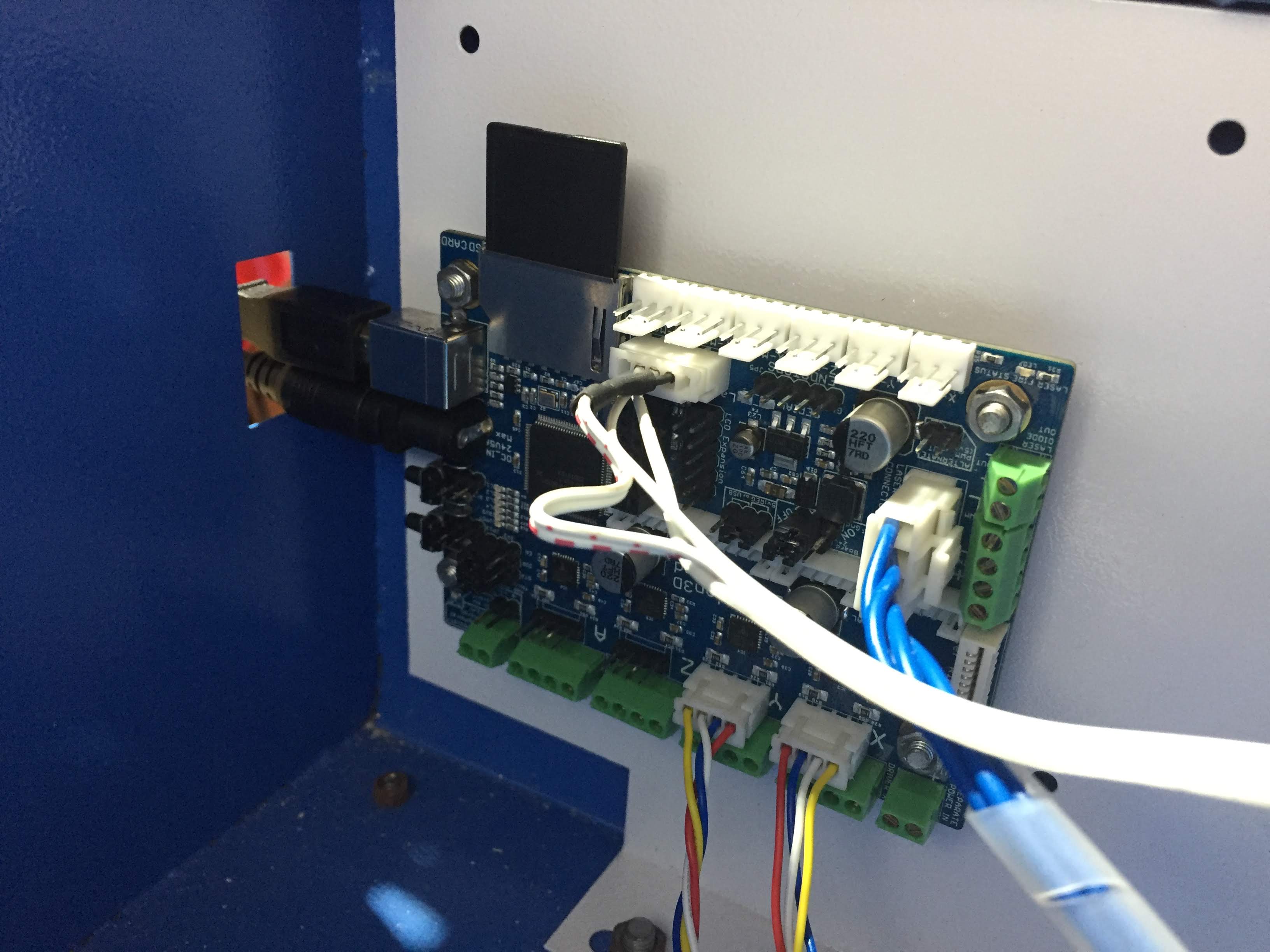 Here is another possible wiring configuration of the K40. I refer to this one as the “Ribbon Cable + Screw Terminal Power Supply” Variant.

Here is the stock M2Nano Board. The flat white cable on the far end of the picture is the Ribbon Cable. The small white 4 pin cable in the middle is the Y Motor Cable. Finally, the large white connector is the K40 Power Connector. In this case, notice that it has a notch on the side, and this notch is pushing the wall of the mating connector outward. It is important to maintain this orientation. 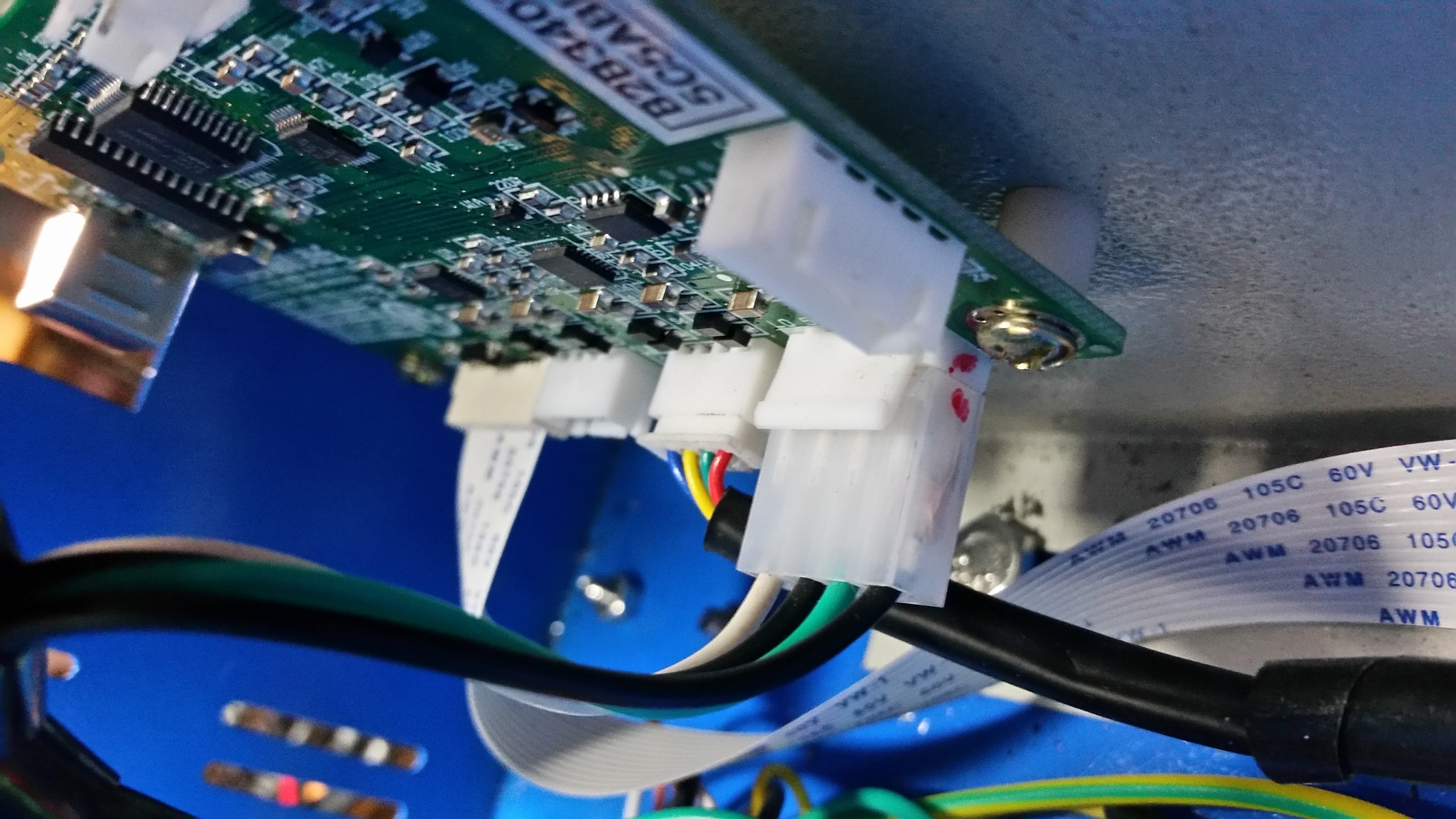 The ribbon cable is plugged in such that the metal contacts on the end face towards the inside of the board (and apparently this leaves a blue portion that faces outwards). 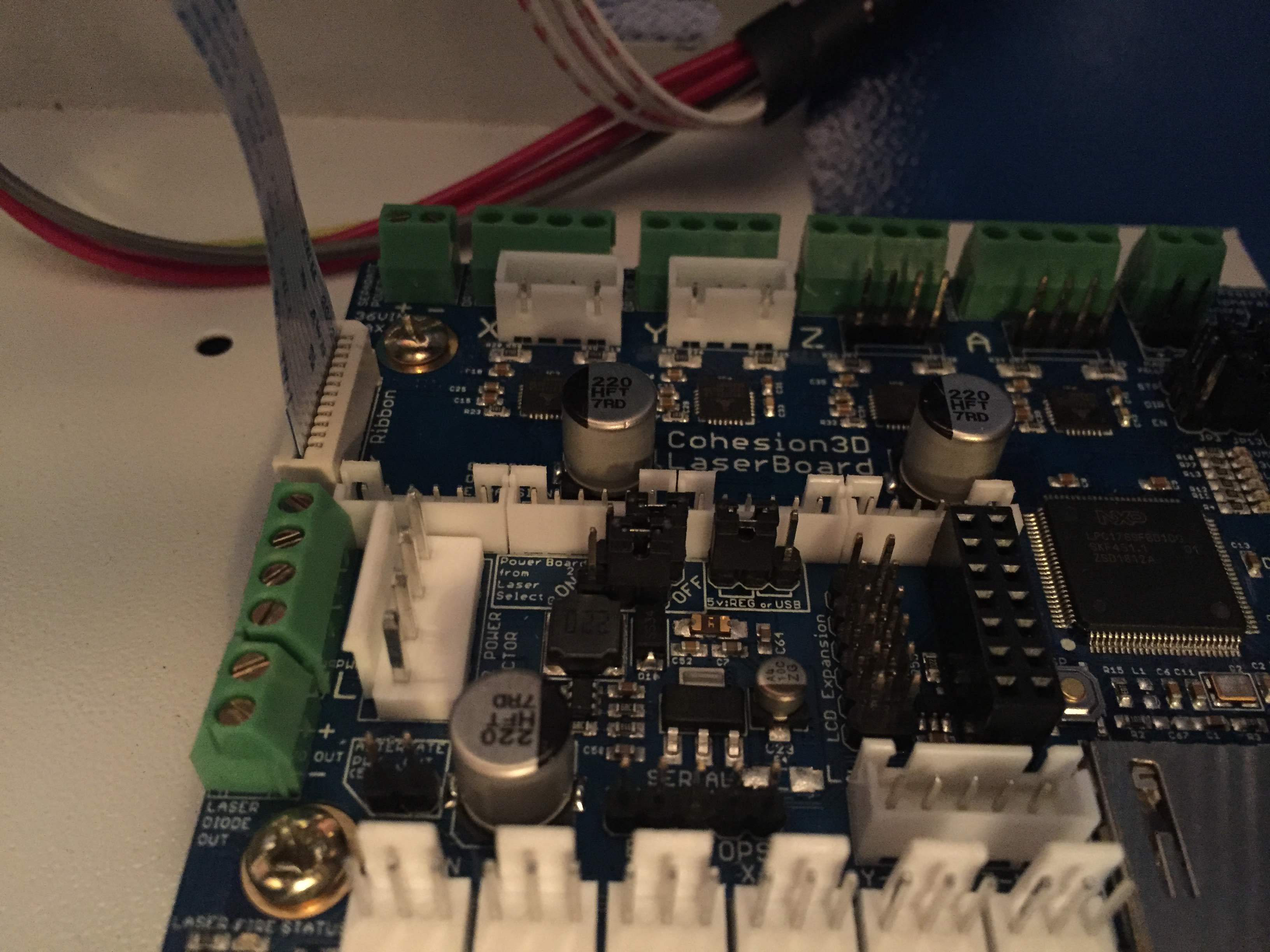 The small white plug 4 pin cable plugs into the 4 pin header for Y. The important part is orienting the plug correctly. The wire colors and order get changed constantly.

And this power connector without the latch has to push the wall of the board connector outward. Once again, note the orientation carefully. 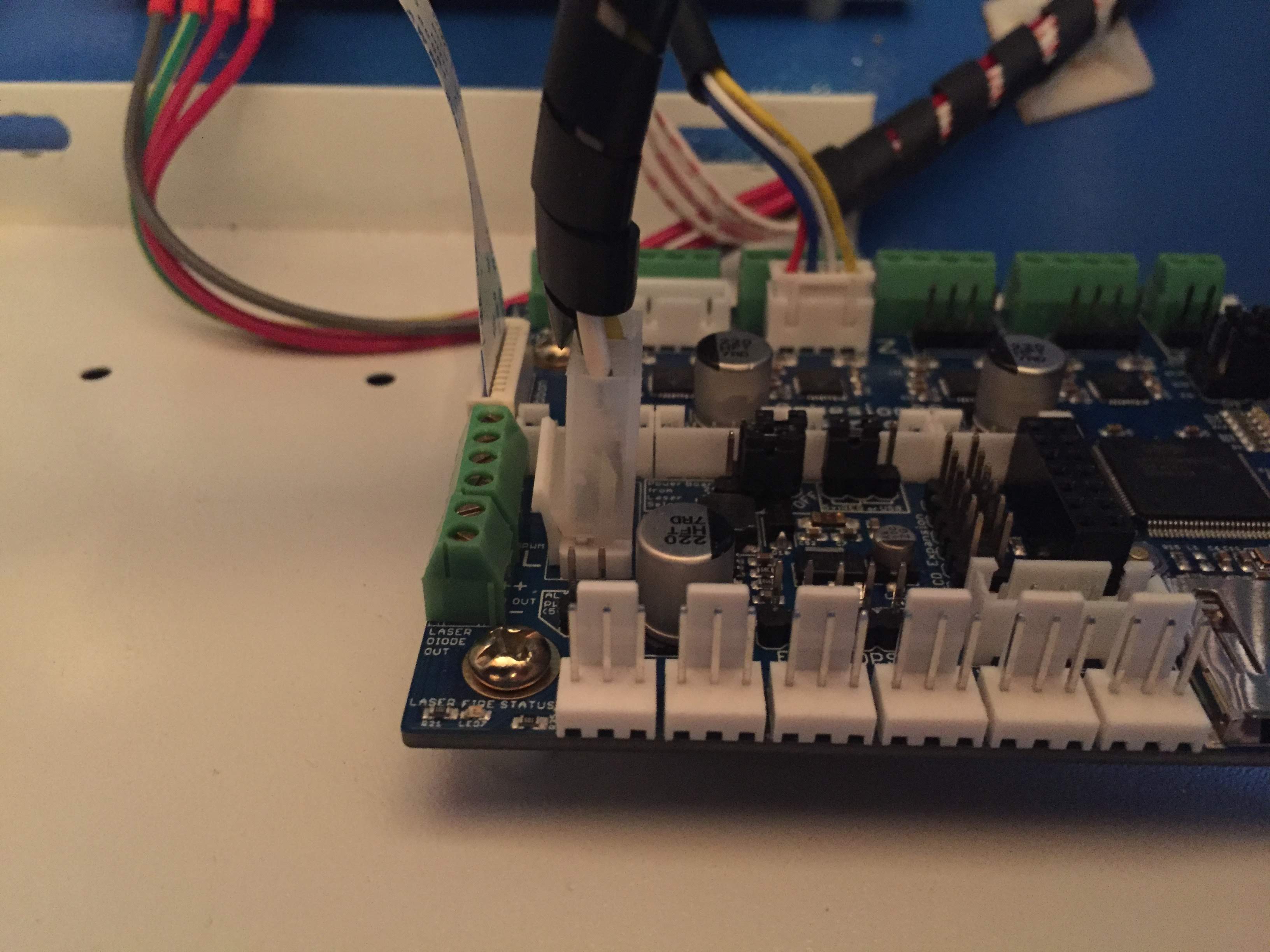 This concludes the specifics of the ribbon cable wiring variant, see above for reinstalling the panel, installing the SD Card, and inserting the DC Power Adapter and USB Cables.

You can now go ahead and plug the AC prongs wall side of the power adapter into your wall outlet. You should see some lights.

On the LaserBoard, there is a stack of LEDs.

At the “top” is a red LED called VMOT. This indicates that the board is getting 24v from the power adapter.

Next is a green LED called 3V3. This indicates that the logic (brain) of the board is getting power.

Finally are 4 green LEDs labeled L4 – L1. After the board has booted, L2 and L3 should be blinking. L1 and L4 should be solid. 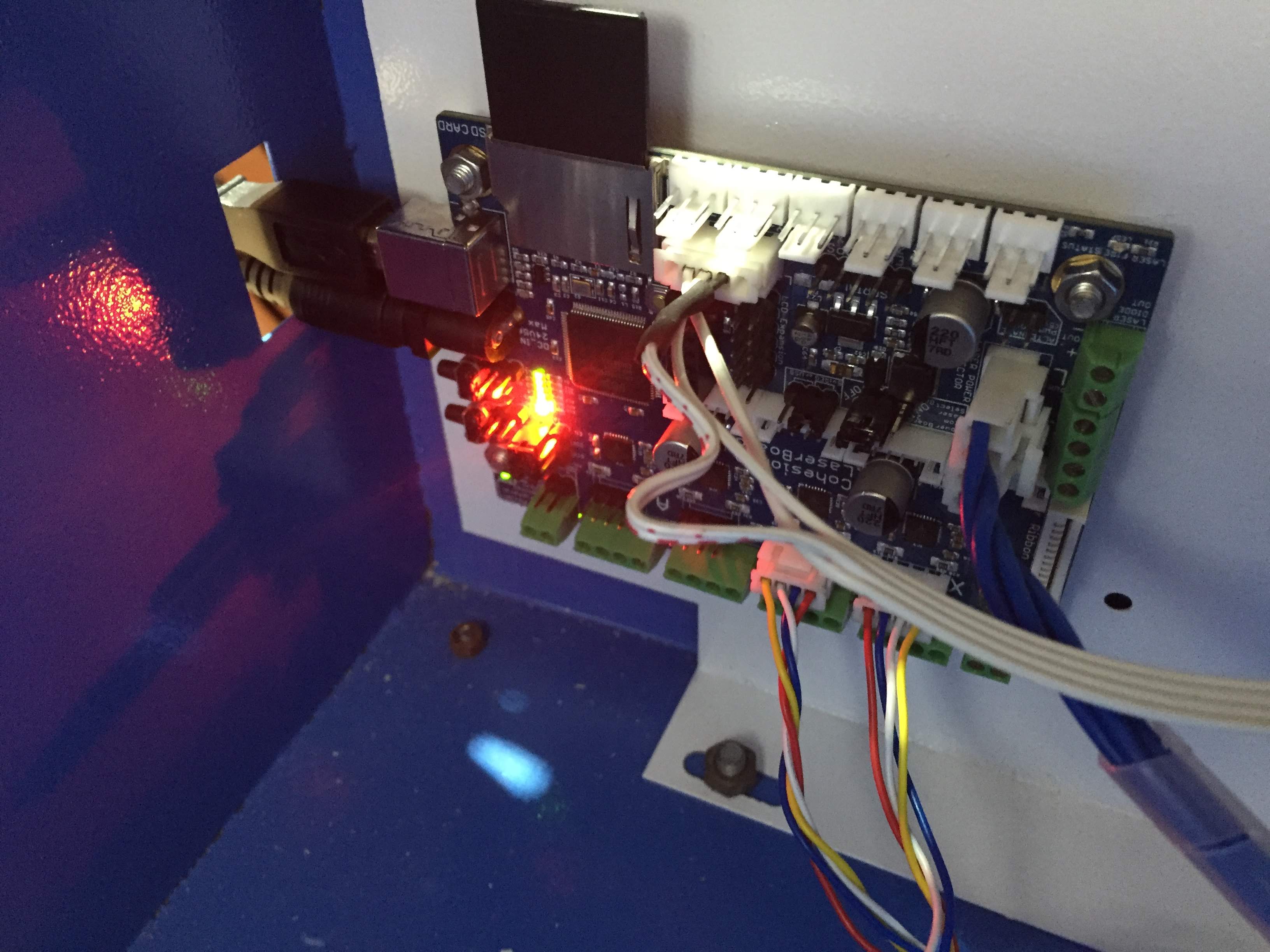 Continue on to: Installing Smoothie Drivers (and knowing whether you need to)